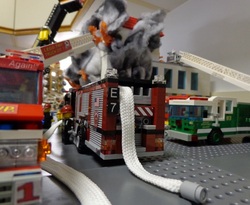 E7, along with a number of units from other department responded to the M/A request to battle a 3-Alarm fire in Rochelle Heights. More information on the incident can be found on the RHFD website by clicking HERE

CH1, E2, E7 and L4 participated with multiple departments in the 2013 St. Patricks Day Parade hosted by the Jakeland Fire Department. A special thanks to Matt J. of Jakeland FD for including LRFA in this event. Pictures of the parade can be found by clicking HERE. 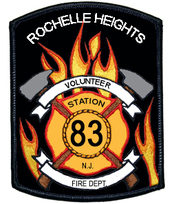 LRFA has signed a mutual aid agreement with the Rochelle Heights Fire Dept. Both departments will now provide mutual aid to each other when needed. 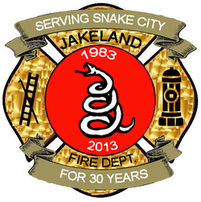 The first Mutual-Aid contract for the LRFA is signed with the Jakeland Fire Department. Having Mutual-Aid contracts are vital to the initial establishment of the Lego Regional Fire Authority as LRFA does not yet have all stations and apparatus in service as of yet. Until LRFA is fully independently operational, the use of automatic mutual-aid will be utilized on every call aside from ems calls and one alarm structure fires.

LFRA has signed a contract with JERSEY SHORE FIRE & POLICE for the design and creation of all department station and unit logos/patches. The first three designs to be accepted by LRFA are shown below.

Chief 1, Engine 2, Ladder 4 and Engine 7 have been sent to Snake City. Keep an close watch on our site for what's to come. 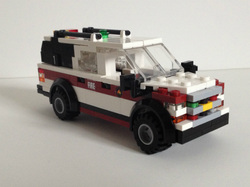 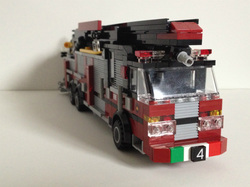 Ladder 4 is a 2013 KME Kovatch, Tandem Axle, Rear Mount Aerial. L4 is equipped with a 100’ 3 section ladder with a 1000 lb tip load built to a 2.5:1 safety factor. Delivered in March 2013 to the Little Italy FIre Station, L4 goes by the nickname "Luigi" and is paired with its Italian counterpart, Mario. More pictures and information on this new apparatus may be found in the Apparatus or Fire Stations pages of this site. 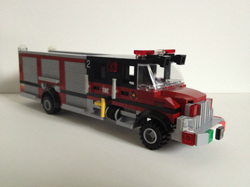 Engine 2 is a 2013 Rosenbauer Commercial Urban-Interface/Structural Pumper on International Chassis. E2 is equipped with a 1250 GPM Rear Fire Pump and a 750 Gallon Poly Tank. Delivered in February 2013 to the Little Italy Fire Station, E2 goes by the nickname "Mario" and is paired with its Italian counterpart, "Luigi"(L4), of which is also stationed at the Little Italy Fire Station. More pictures and information on this new apparatus may be found in the Apparatus or Fire Stations pages of this site.

LRFA has chosen KME to build the first aerial apparatus to serve the Lego Regional Fire Authority. The new ladder will serve out of Little Italy as Ladder Co. 4 and will be a rear mount with no pump. 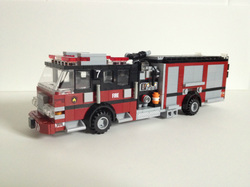 Engine 7 is a 2013 Pierce Arrow XT Custom Structural Pumper. E7 is equipped with a 1750 GPM pump and a 500 Gallon Poly Tank. Delivered in January 2013 to the Gaslamp Fire Station, E7 is known as the "Night-Owl" running a average of 2,700 calls per year (8 calls a day), 70% of which occur between the hours of 2200 - 0600. 40% of calls received in E7's area are answered by units from surrounding stations as E7 is usually on another call. For this reason, plans of adding a second apparatus to the Gaslamp District are in the works. More pictures and information on this new apparatus may be found in the Apparatus or Fire Stations pages of this site.